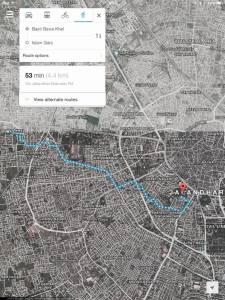 MY WAY TO HIGH SCHOOL FROM SIRAJ (ISLAM) GANJ TO BASTI BAWA KHEIL 4.4 KM EACH WAY
As I have mentioned in my earlier Blog, I remained in touch with classmates with whom I started my first grade in elementary school in Basti Sheikh where I spent birth to early secondary school until my parents moved to a new house in Jalandhar City, in India. I also mentioned that among the closest friends were Amanullah, Bayzid, Khairatali and Zafar. I remained in touch with first three ever after my move to Pakistan and then to Canada. Bayzid even visited me in Toronto with his wife.

Once moved to our new home in Mohallah Siraj Ganj, near Adda Nakodar, in Jalandhar City, after my father returned from Singapore where he was working with my uncle Yaqoub, taking the last ship that left the Singapore Port to Madras in India, safely arriving but bombarded on the seas by enemy planes as it was carrying Gold Reserve to safety in India. I still have his landing papers with me as a reminder of his sheer luck to survive through all that.

When I started going to my High School, I found new friends with whom I could travel a long 4.4 km route. Among my two new friends, Mushtaq and Akram, the later turned out my BEST friend in life until now.

Akram (later in life known as MIAN MOHAMMAD AKRAM) is the dearest friend and brother I ever had. He stood firm in his friendship and never let me down in my aspiration to have the best education, fully supporting and guiding through all ups and down of life. He encouraged me to proceed to the US for higher education wherever I desired, first at California University at Berkeley and later at Chicago University at Chicago. I had won twice FULLBRIGHT Scholarships to attend these universities, receiving Master’s Degrees, only leaving my Ph.D incomplete at Chicago.

This Blog is dedicated to a Best friend in my life: Mian Mohammad Akram. His family became my family and attended his wedding once we linked up in Pakistan, saw all his children born, grown, and getting educated and later married before my eyes. His entire family is so close to me and they strongly feel as if we (Akram and me) were real brothers. Even at this moment, all his children and their children are in touch with me on daily basis on the FaceBook. Akram is a man of integrity, trustworthy, worthy of highest respect, respecting and respectful, rare breed and steadfast in life with most loyal friends (some of them became my friends too)

Hereunder is collection of my friend Akram’s pictures, from top to bottom: 1st, dated 1953-5-11; 2nd, dated 1956-10-5; 3rd & 4th undated.
The last one with garlands during is wedding in Gujranwala. His wife turned out to be my classmate’s close classmate and friend.

MY CLASSMATE AND BEST FRIEND FOR OVER 75 YEARS UNTIL NOW

SHARED MEMORIES OF OUR GOING TO SCHOOL TOGETHER

Leaving from Akram’s place, we will cut through the fields behind his place, cross road going to Basti Guzan and Basti Sheikh, enter the Mission School, crisscrossing and finally take a path through the fields but stopping at various favorite places, one field with Guava trees, where we would take aims to get ripe guava if we could, until the framer will chase away or run after us to catch and give us a beating. We would go breathless laughing and running, every time the same encounter. By the time close to school, we would be exhausted and tired with daily confrontations.